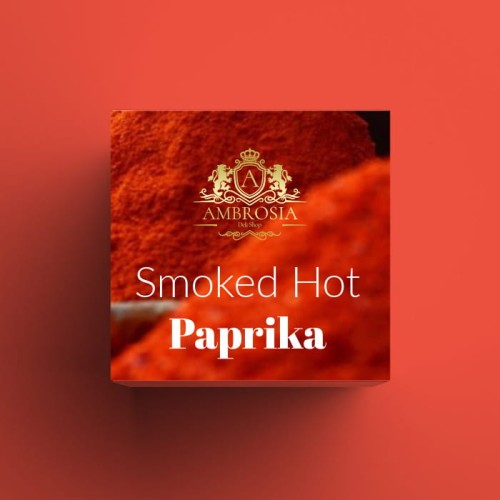 Smoked paprika is characterized by a sweetish taste and an intense smoke flavor. It goes well with meat and fish dishes. Goes well with cheese and cottage cheese, as well as baked beans and stews. It will perfectly emphasize the taste of Spanish, Mexican and Middle Eastern cuisine.

Smoked paprika is a spice known and appreciated especially in Spain (it is used to produce the famous Chorizo sausage). It is obtained from selected, top-quality pepper fruits. They are then dried by smoking with oak wood smoke and then ground in stone mills.

Peppers contain vitamin C and B, a large amount of beta-carotene and essential oils. Pepper is one of the spices that stimulate the secretion of gastric juice and improve the appetite. In Chinese medicine, hot peppers cure depression and fatigue. It also has anti-inflammatory and bactericidal properties. It has a strong effect on the mucous membranes, therefore it has a cleansing effect. Peppers doused with 70% alcohol can be used as a rubbing agent, relieving neuralgia and pain in the roots. However, you have to be careful not to let it get into your eyes. It should not be abused by people with gastric or duodenal ulcers.

Paprika is a spice that emphasizes the taste and whets the appetite, therefore it is used in many dishes in many cuisines around the world. It is often used instead of pepper in the preparation of cold cuts, sauces, soups, cakes and many other dishes. The distinctive smell of natural smoke makes smoked paprika very well enrich the taste of grilled meats. In addition, it can be used for marinating and seasoning meat, poultry, seafood, fish and for the production of cold cuts.