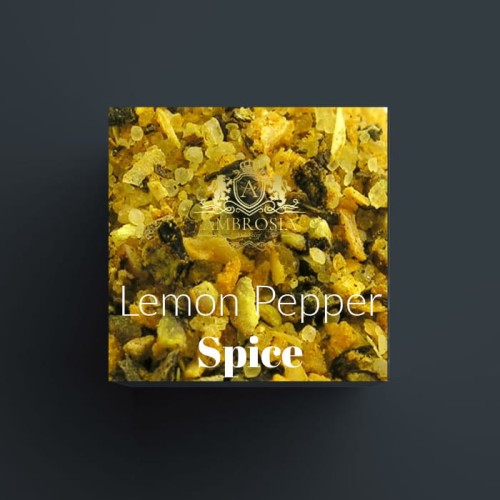 Lemon pepper is not only tasty, but also healthy! Find out about its amazing properties

Lemon pepper has appeared in Irish cuisine relatively recently. Due to its characteristic, slightly sour aftertaste, it is perfect for enriching the taste and aroma of fish dishes, seafood, salads and soups.

It combines the advantages of traditional pepper and lemon in one spice, thanks to which it can facilitate and accelerate the seasoning of dishes and enhance their taste. Why is it worth getting lemon pepper and what are the benefits of using it?

A culinary recipe related to this spice: Asian style flounder with lemon pepper

Lemon pepper used in the kitchen

Lemon pepper is a spice mixture that is most often added to fish dishes. The addition of citric acid and lemon peel perfectly matches the taste of fish and seafood, emphasizing it and bringing out the best in it.

We can also create home-made batter with lemon pepper. Just mix lemon pepper with breadcrumbs and coat the mixture with fish or meat. With the addition of olive oil, lemon pepper is perfect for making a homemade marinade.

Lemon pepper is also perfect as an addition to mild-tasting cooked, baked or grilled meats. We can also add it to soups, salads and dressings. Suitable for both hot and cold use.

Lemon pepper is an aromatic and colorful blend of spices that will perfectly complement the taste of fish and other dishes. Its regular use will positively affect our digestion, improve natural immunity and speed up metabolism.

Lemon pepper is not only a combination of pepper and lemon!

In fact, lemon pepper is not only a combination of traditional peppercorns with citric acid. It is a carefully prepared mixture of several spices and dried vegetables, which gives lemon pepper its unique taste and aroma.

Lemon pepper perfectly replaces the need to use a few spices and saves valuable space in the kitchen cupboard. Thanks to it, we no longer have to store containers and bags with several different spices.

But what spices are in the lemon pepper blend?

In the composition of lemon pepper, we most often find such popular spices as: black and white pepper, citric acid, lemon peel, onion, garlic, corn, parsnip, turmeric and in some cases also a small addition of sugar to slightly soften its sour aftertaste.

So if we like all these spices and we like to use them in our home cooking, it is worth taking an interest in their perfect combination, i.e. lemon pepper. Lemon pepper is a spice mixture that has a characteristic, intense yellow color.

It is mainly due to the presence of turmeric, which acts as a natural dye. Its addition allows not only to give our dishes an interesting taste and smell, but also has a positive effect on their appearance and is a perfect decoration for fish dishes, meats and sauces.

Lemon pepper and the health properties of its individual ingredients

The use of lemon pepper has a positive effect not only on the taste and appearance of dishes prepared with its participation.

Each of the spices included in its composition has its own unique properties, which together have a positive effect on our health and well-being.

So let's check what good lemon pepper can offer us!

Pepper and turmeric for good digestion and against cancer

The main ingredient of lemon pepper is the traditional ground black pepper and its white variety. It is a spice that practically no person can live or cook without.

Pepper is a universal spice that we add to taste to virtually all home dishes. Its composition includes, among others. piperine, the substance from which this spice owes its spicy flavor, vitamins C and K as well as iron, potassium and manganese.

Piperine contained in pepper is a strong antioxidant that positively affects our entire body and prevents premature aging. Pepper also has a great influence on our digestion, prevents constipation and soothes flatulence.

It also stimulates sweating, thanks to which our body has the ability to expel toxins. It is recommended for consumption by athletes and people on a diet, as it greatly accelerates metabolism.

It also helps during colds by facilitating the expectoration of secretions and cleansing the upper respiratory tract. The addition of turmeric in lemon pepper gives it an interesting, intense yellow color and supports digestion and has a positive effect on the work of the liver, pancreas and stomach.

Dried vegetables and the addition of lemon for good immunity

Our immunity is also positively influenced by the addition of garlic and onions, which can be found in a lemon pepper mix.

Onions and garlic are the two most popular natural antibiotics that support our natural immunity and protect against disease. A similar role is played by finely ground lemon peel and citric acid.

These are ingredients rich in vitamin C, which is the best known natural antioxidant and a vitamin that supports our immunity. The content of other dried vegetables, including corn and parsnips, allows you to extract the full range of flavors from our dishes.

Thanks to this composition, lemon pepper is a spice that should be present on our tables as often as possible, especially in autumn and winter, when we are most often sick.

The high content of vitamin C in its composition will provide us with better immunity and will make us recover faster in the event of illness, and the disease itself will have a milder course.

Lemon pepper is perfect for you if ...

Lemon pepper, thanks to such a composition of spices and additives, is ideal for regular consumption by people who: