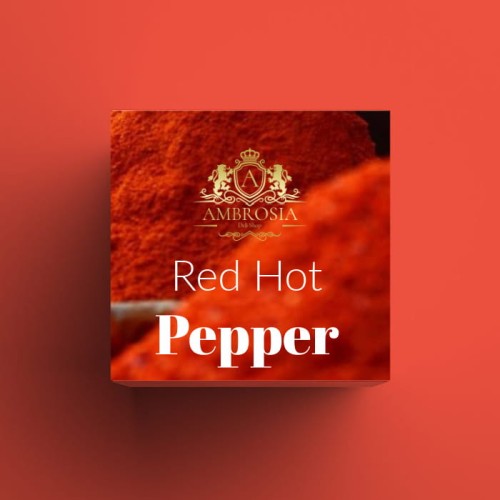 Paprika powder is a spice obtained from the dried and ground fruits of annual pepper, a plant grown in tropical regions of Central and South America and in Southern Europe. It has an aromatic smell and the taste - depending on the species - sharp and burning, or mild and sweet. Pepper is the staple seasoning in Hungarian, Mexican and Indian cuisines. It strengthens the body's immunity and has a beneficial effect on digestive processes.

Hot pepper enriches the taste of meat, poultry and fish dishes. It is also used in soups, vegetables, salads and cheeses to make them sharp and expressive. It is a popular, aromatic food dye, it perfectly colors sauces (e.g. mayonnaise and cream) as well as egg, rice and poultry dishes. It is an ingredient of many commonly used spice mixtures.

Culinary recipe with this product: Spanish garlic soup with bacon

Spiciness scale - the spiciness of a given pepper is given in the so-called Scoville scale (abbreviated SHU). The scale allows you to determine the amount of capsaicin, a substance that causes a feeling of sharpness in the product.

Sweet and hot peppers. Properties and nutritional value of peppers

Peppers are a good source of nutritional value. Moreover, as one of the few vegetables, paprika retains its properties under the influence of stewing and baking. Fresh pepper contains more vitamin C than lemon, and powdered pepper improves digestion and stimulates the appetite. The medicinal properties of paprika also include, among others prevention of calcification of blood vessels and elimination of headache

Paprika (capsicum annuum) is a plant from the nightshade family, which, thanks to its properties and nutritional values, was used not only in cooking, but also in natural medicine in Central and South America as early as 6000 years ago. Diego Alvaraez Chanca, accompanying Columbus' second expedition in 1493, brought the pepper seeds to Europe. However, the Hungarians contributed to the popularization of the culinary qualities of paprika in Europe, and they began to cultivate it in 1526, and then made it their culinary banner. We like healers, numerous peppers? Exactly! And without Hungarian inventiveness and paprika, they would not be there. It is worth knowing that it was from Hungarian peppers that in the 1930s crystalline ascorbic acid - i.e. vitamin C. Perhaps the Hungarians deserve the "Nobel for paprika"?

First of all, paprika is an invaluable source of vitamin C. It contains four or five times more than lemons. This vitamin is destroyed in other vegetables and fruits under the influence of culinary processes. Not in paprika. Both fresh pods eaten in salads and various dishes and preserves made from them are valuable!

To remove seeds, cut the top of the pepper.

It is a treasury of powerful antioxidants that protect the body against the harmful effects of free radicals. Half a medium fresh pepper (10 grams) provides the daily dose of beta-carotene, two pods cover the daily requirement for vitamin E.

Lycopene contained in the pepper captures free radicals. Peppers provide a lot of B vitamins and potassium, phosphorus, iron and magnesium, and low in calories. Raw peppers are the healthiest, but they also retain a lot of nutrients when stewed or baked. Paprika undergoes little change in the processing process.

Despite the many nutritional values and vitamins, pepper belongs to the nightshade family, so it should be eliminated from the diet of people suffering from various types of rheumatic diseases and arthrosis, as well as people allergic to pepper.

Vitamins C, A and E, which peppers do not lack, inhibit cell aging, strengthen immunity, improve the condition of blood vessels, weaken the harmful effects of bad cholesterol, protecting against atherosclerosis.

Green and red peppers are the fruits of the same plant. Red peppers are simply more mature and contain more vitamin C and beta carotene than green peppers.

Powdered hot pepper is not only a popular spice that improves digestion and stimulates the appetite, but also a remedy for headaches that has been used in folk medicine for many years. Capsaicin, which gives peppers a searing taste, has a warming and analgesic effect. It cleans the respiratory tract, alleviating the symptoms of colds. However, hot pepper should be eaten in moderation so as not to irritate the digestive tract.

Peppers are a mild diuretic and are often consumed to lower blood pressure. At the same time, it protects against premature calcification of blood vessels.

Extracts of hot pepper varieties containing capsaicin are used in medicine in the form of various types of ointments, patches and liniments - used in radiculitis, rheumatic pain and neuralgia.

"Pepper" drugs are also used internally in the atony of the stomach and intestines, insufficient secretion of digestive juices, flatulence and constipation, due to the fiber contained in it, which regulates the digestive tract.

The rich variety of pepper varieties, from sweet to very hot, allows you to choose your favorite species. For seasoning, thin-walled varieties with small berries are used. A type of vegetable, such as the popular in Ireland Bell pepper (its walls are thick and fleshy, and the fruit is plump), are used as the main ingredient of a dish, e.g. soup or cure. In some countries, paprika is especially liked, which is why, for example, in Mexico and Hungary, paprika is a characteristic ingredient of many regional dishes.