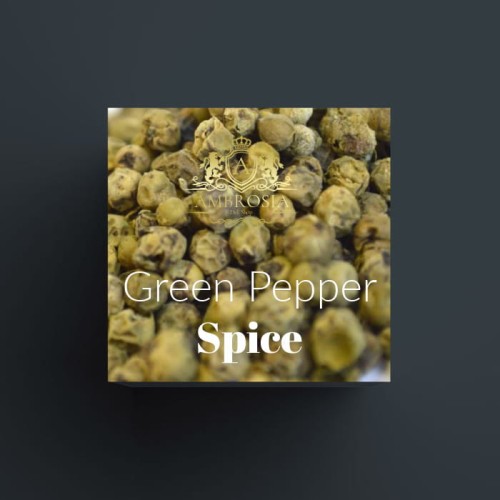 Availability: Large
Dispatched within: Next Day
Delivery: The price does not include any possible payment costs check the delivery methods
Price: €4.99 4.99

It is a berry of an evergreen climber, grown mainly in Asia. Green pepper is obtained from unripe green fruits of the same plant as black pepper. The drying process of green pepper is carried out using modern technology, thanks to which the green pepper does not darken and retains its typical color and valuable flavors.

Green pepper is characterized by a slightly sweet and refreshing flavor note, it has a sophisticated and distinctive aroma. It is definitely milder in taste than black pepper. Grain green pepper is used for seasoning meat dishes, fish, soups, sauces, it emphasizes the taste of salads. A small amount can also be added to desserts.

How to use green pepper in grains?

When it comes to the way of use, this type of pepper is no different from the others. You just need to add the right amount of spice seeds to your dish and wait for it to fully develop its aroma. Thanks to this, the dishes will gain an unusual taste.

Fry the finely diced onion in olive oil and fry for about 3 minutes. Pour the decoction over it and cook for about 10 minutes, until it is reduced to less than half of its original volume. Add cream, wine, green pepper and cook until thickened for about 3 minutes. Season with salt and thyme; serve hot with meat and fish.

This reduction in sharpness in green beans is directly related to the lower level of piperine - an alkaloid, which determines not only the taste, but also the health benefits of Piper nigrum fruit than in black pepper. For this reason, green pepper cannot compete with black pepper in terms of its potential to accelerate metabolism, combat indigestion, increase the absorption of other nutrients, and improve memory and well-being. However, it has other properties that make it a valuable dietary supplement.

First, fresh grains of unripe pepper have, according to scientists, a particularly high antioxidant index (ORAC) - probably even higher than white and black pepper. The piperine deficiency is covered by the presence of other important ethereal compounds, of which there may even be over 100 in green pepper!

The great advantage is also the very high level of vitamin C, which is not present in black pepper at all - it is enough to eat one teaspoon of grains to cover 80% of the body's daily requirement for vitamin C! In addition, green pepper contains protein, fats, carbohydrates, fiber, vitamins - B vitamins (vitamin B2, B3, B5, B6, B7 and B9) and vitamins K and minerals - zinc, phosphorus, fluorine, iodine, magnesium, manganese, copper, potassium, sodium, calcium and iron.

Green pepper, however, is still a fairly good source of piperine and as such it can relieve stomach upset and improve the digestive process, being especially recommended for flatulence and excess intestinal gas. It is even believed that consumption of green pepper stimulates the secretion of stomach acid. Scientists also suggest that this unusual spice may be helpful in the fight against cancer processes.

The content of vitamin C and other antioxidants, as well as minerals and dietary fiber in green pepper is important because, unlike black beans, it can be consumed quantitatively. Both due to its milder taste and juicy, vegetable consistency (in the case of marinated or dried pepper, but soaked before consumption), it is not a problem to eat even 2 tablespoons of green pepper in one meal. It is also worth adding that moderate spiciness can be a great advantage.

Black pepper shows side effects in many studies, such as irritation of the gastric mucosa, urinary tract and even the prostate! When accidentally inhaled (especially with ground pepper), it can cause unwanted reactions and worsen asthma symptoms. Meanwhile, with green pepper, there is no such threat.