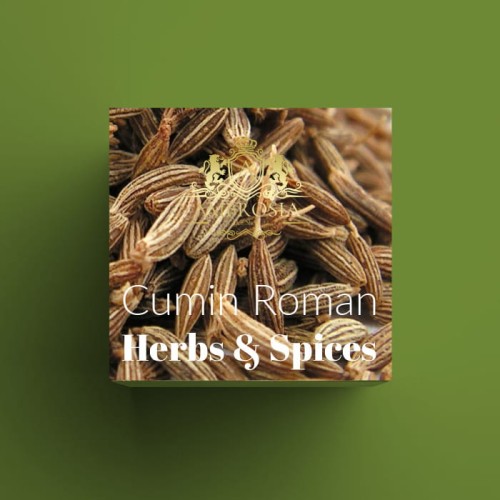 Availability: Large
Dispatched within: Next Day
Delivery: The price does not include any possible payment costs check the delivery methods
Price: €3.50 3.50

Cumin (Roman cumin) - use in the kitchen

Roman cumin is a very aromatic and spicy spice that has a slightly bitter taste. Kumin is used in cooking as a seasoning for dishes. It comes in the form of grains and ground. It is available as a standalone spice, as well as an ingredient in spice blends, mainly curry and garam masala.

Cumin (Roman cumin) - what is it added to?

Kumin is suitable for seasoning meat and fish, soups, stews, and for sprinkling it on bread or cakes. In addition, it is perfect as a seasoning for dishes made of leguminous seeds, vegetables and as an addition to rice or groats. Cumin is also used to season cabbage, add to tomato sauces and marinades. Oil obtained from cumin by steam distillation is used to flavor alcoholic beverages, desserts and other spices. Cumin can be found in French cheeses, such as Leyden cheese, and in some traditional French breads. In Germany, cumin is used in the preparation of liqueur.

Culinary recipe with this spice: Minced meat with pumpkin and beans

Roman cumin is a spice from Egypt, which - thanks to its properties - was widely used in medieval Europe, both in medicine and in cooking. Today, cumin is grown in Morocco, Iran, Turkey, India, China and the Americas. The most popular in Mediterranean cuisine for its taste and aroma.

Cumin is an excellent source of iron - 100 g of spice exceeds the daily requirement of an adult for this mineral element by more than 6 times. As a result, cumin both prevents and supports the treatment of anemia. Iron is important, among others for menstruating women who lose iron when they bleed. In addition, cumin, due to its high content of iron, vitamins C and A, has a positive effect on the immune system.

Animal studies have shown that cumin contributes to lowering blood glucose levels in hyperglycemic individuals and reducing body weight. Additionally, a decrease in blood urea levels was observed. It was also found that cuminaldehyde and cuminol contained in cumin increase insulin secretion. In another study, cumin seed methanol extract was found to reduce blood glucose levels, levels of glycosylated hemoglobin, creatinine, and urea, and to increase blood insulin levels in diabetic rats.

Thanks to the presence of aromatic essential oils and disinfectants, cumin acts as an expectorant, diluting phlegm in the respiratory tract and facilitating its elimination by coughing and spitting. Therefore, it is recommended in the case of inflammation of the respiratory tract (e.g. bronchitis), as well as in the course of asthma.

Cumin can cause skin allergies and allergic respiratory reactions. People taking i.a. Antifungals, antibiotics, anti-inflammatory drugs, cholesterol-lowering drugs, painkillers or iron supplements should be used with caution and consult a doctor for safety.

Studies have shown that extracellular use of cumin essential oil significantly reduced the incidence of pentylenetetrazole (PTZ) -induced seizures. In addition, it was observed that essential oils contained in cumin have an effect on the prolongation of seizure-free periods, lowering the amplitude of the hyperpolarization potential (AHP) and inhibiting the rate of epileptic seizure triggering.

Essential oils and aldehyde isolated from cumin have antibacterial properties. They inhibit the growth of bacteria, including: Escherichia coli, Staphylococcus epidermidis, S. aureus, S. hemolyticus, Propionibacterium acnes, Corynebacterium diphtheriae, Erysipelothrix rhusiopathiae, Bacillus cereus, Clostridium tetani. They do not affect the growth of Pseudomonas spp bacteria. For this reason, they prevent the occurrence of numerous microbial and fungal infections of the skin. It is worth knowing that cumin is also used as an ingredient in fragrant creams, lotions and perfumes. In addition, caraway seed oil is used as multifunctional luminescent paints.

Cumin increases milk secretion during lactation. It owes this property to the presence of thymol, which increases secretion from the glands, including milk, from the mammary glands. Consuming cumin is beneficial both during lactation and pregnancy due to the high iron content, the demand of which is increased during this period. Additionally, cumin is a source of calcium which is an important component of milk.