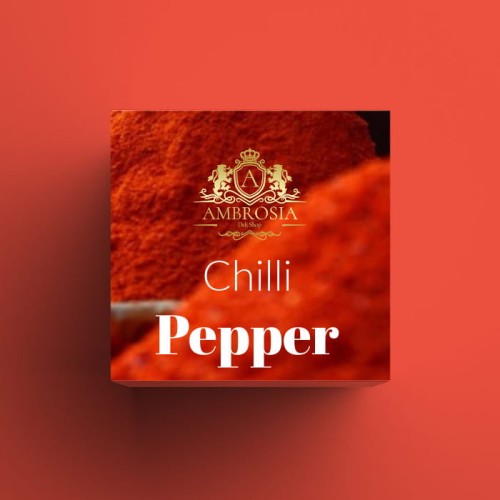 It is a spice obtained from the dried fruit of bush pepper, grown mainly in South America and South Asia. It is the sharpest spice used in the kitchen and owes its flavor to the large amount of capsaicin contained in it. Chili stimulates the digestive processes and increases the appetite. It is used for meat dishes, spicy sauces and vegetables. It is used to season stews, poultry, fish and clams. Chili is an ingredient of many spice mixtures, including curry, and well-known spice sauces: chili, tabasco, and sambal.

There are over 200 recognized species of chili pepper grown in the tropics. On top of that, there are tons of local varieties that have yet to be described.

Chili pepper owes its fiery spice to a substance called capsaicin. The sharpness of peppers is measured in the so-called Scoville scale and ranges from 0 to 300,000 units, depending on the species. Paprika reached Europe and India in the 15th and 16th centuries thanks to the discoveries of Christopher Columbus. Participants of Columbus' expeditions wrote about chili: "... on the island of Hispaniola, the plant called by the Indians" axi "" is sharper than pepper and often used by the natives (...) there are shrubs similar to rose bushes, the fruits of which are pieces long cinnamon bark is full of tiny seeds as spicy as pepper, the people of the Caribbean eat these fruits like we eat apples ”.

The longer it takes to cook with chili, the spicier the dish will be. The stir fry oil can be seasoned by adding one or two dried peppers, fried for a few minutes. Remove the peppers before adding the rest of the ingredients. It is used with Indian, Mexican or Thai dishes to add spiciness and flavor. Recommended for marinade for meat and shrimps before grilling. A perfect addition to Mexican chilli con carne or Portuguese piri piri. Can be added to the pickle to increase spiciness and increase the visual appeal of the dish.

Health properties of chili peppers. How does capsaicin work?

Chili peppers have many health-promoting properties. They are rich in vitamin C (100 grams contain as much as 240 percent of the daily requirement of this substance), vitamin A, B6, iron, magnesium, as well as potassium and manganese.

Capsaicin, which is responsible for the sharp taste of peppers, accelerates fat burning (by increasing the metabolic rate) and is great for slimming.

Peppers are also low in calories and contain a lot of fiber. In addition, the anti-cancer properties of capsaicin should be mentioned - as evidenced by the low incidence of cancer in Mexico and other countries whose national cuisines are based on the spicy taste of chili peppers.

Capsaicin also has a beneficial effect in fighting stomach ulcers. Other medicinal properties of chili peppers also include supporting the work of the circulatory system, an anti-pain effect (e.g. migraines), a positive effect on the immune system and reducing cholesterol levels.

According to estimates by the World Health Organization, over 300 million people worldwide suffer from migraine headaches, including over 400,000 million in Ireland. Migraine attacks mainly affect women. As many as 25 percent complain about them. ladies between 25 and 45 years of age.

Migraine pain usually begins on one side of the head, is pulsating, pulsating, and worsens over time. Its intensity is so great that it is rated 8 on a scale of 1 to 10. Most people suffering from this ailment also feel hypersensitive to strong stimuli such as light, sound and smells.

Capsaicin, the substance responsible for the spicy taste of chili peppers and some varieties of pepper or spices, is currently used in medicine to produce anesthetic drugs used externally. Research by scientists from the University of Nottingham has also proven that this smoking ingredient in paprika can aid in the treatment of cancer.

Scientists decided to use the mechanism of action of capsaicin to relieve those suffering from severe migraine pains. This organic chemical acts strongly on pain receptors. Contact with the skin of capsaicin causes the release of substances that lead to increased blood flow, which we feel as a feeling of "burning, pain". The mechanism of transmitting the signal about feeling "pain" from the nerve to the nerve through the appropriate receptors prompted scientists to look for a drug formulation that would block this chain, and thus migraine pain would not develop.

Preparations with capsaicin are willingly used by the biggest stars of show business. The compound is very effective in regulating metabolic processes and promoting weight loss. It activates the processes that lead to more efficient fat burning. According to specialists, chilli treats increase energy and oxygen consumption by as much as 30%. This metabolic rate persists even one hour after a meal. From the research of the team of prof. Richard Mattes from the American University of Purdue shows that even small amounts of chili or cayenne pepper affect the production of thyroid hormones that regulate appetite - adrenaline and dopamine.

The best effects are observed in people who are not used to hot spices. The capsaicin diet is very popular, the main principle of which is to season dishes with red spices: chili peppers, hot and sweet peppers and peperoni.

Capsaicin promotes the production of endorphins

Capsaicin increases endurance during long and hard training. By increasing the absorption of oxygen by the body, it enhances its absorption and strengthens the lungs. Chili extract is often found in the composition of ointments and patches, because the burning alkaloid perfectly warms the joints and muscles.

Who should be careful?

Capsaicin should be avoided by people suffering from diseases of the digestive or digestive system. Spicy ingredients can cause irritation, aggravate symptoms (e.g. stomach ulcers) and cause, among others, stomach pain, heartburn or flatulence. At the same time - it is a fact that in countries with high consumption of paprika (Hungary or Mexico) no more cases of gastric diseases were found.

People struggling with hypertension must be careful about capsaicin, because the compound significantly increases this indicator.

Alkaloid sometimes also adversely affects our skin and can contribute to the formation of pimples. People with acne can expect inflammation and sebum production to worsen after eating spicy foods.

There are many types of chili peppers. They differ from each other in size, shape and, above all, the level of sharpness. The latter is determined on the basis of the so-called the Scoville scale - a special range of spices developed by the chemist Wilbur Scoville, measuring the capsaicin content in a given product or substance. It is this relationship that is responsible for the sharpness of, among others, chili peppers. The value is given in specially developed spice units - SHU.

One of the most popular peppers of this kind is undoubtedly the jalapeño. This small (5-10 cm tall) green or red vegetable is a frequent addition to Mexican dishes. In the Scoville spice scale, this pepper is in the range of 2,500 - 8,000 SHU. The least spicy annual sweet pepper has a value of 0.

Piri-piri it grows on small shrubs, up to 120 cm in height. The pepper itself is small - it measures about 2 centimeters in length and is used, for example, in many Portuguese dishes. On the Scoville spiciness scale, it reaches a value of over 100,000 SHU. Other popular types of chili peppers also include cayenne (with a SHU value of approx. 30,000), tabasco (2,500 - 8,000 SHU) and pepperoni (100 - 500 SHU). The variety bred in India - Bhut Jolokia and the American Carolina Reaper have high indexes. The habanero and serrano peppers, as well as the so-called cayenne pepper.

How to relieve the burning sensation?

Capsaicin is responsible for the sensation of heat and burning that occurs after eating spicy foods. How to put out this "fire in the mouth"? Certainly not with water, as the alkaloid does not dissolve in it. A better solution is to drink a glass of fatty milk or yogurt (casein protein breaks down the connections of capsaicin with pain receptors).

Licking ice cream or tasting tomato juice or a drink containing citrus fruit juice will also ease the experience. We can chew a spicy dish with a fruit with a high acidity, e.g. orange. Some people advise you to combine dishes enriched with spicy spices with starchy side dishes: rice or bread. In many Asian countries, spicy treats are washed down with hot tea, and in the United States, they are served with thick cream.

Capsaicin contained in chili peppers is used externally as a medicine that warms the joints and muscles (ointments, warming patches). It is also present as a component of painkillers.

Scientists from Nottingham University have proven that capsaicin stimulates cancer cells to self-destruct by attacking the mitochondria of cancer cells responsible for producing energy in them. The inhibitory effect of capsaicin on the development of neoplasms such as: lung, colon, prostate and glioblastoma has been confirmed.

Capsaicin inhibits the growth of Salmonella typhimurium, Pseudomonas aeruginosa and Helicobacter pylori bacteria, which are responsible for the development of gastric and duodenal ulcers.

At home, you can prepare the oil to be used in pain in muscles, joints and rheumatic pains. It can also be used as an addition to dishes such as salads. How to prepare the oil? A few teaspoons of chili peppers Put into a jar. Pour two glasses of olive oil or good oil, e.g. linseed oil. We set aside in a dark place for a week. Shake the jar daily. Then we strain the oil through a sieve and pour it into the bottle. The oil warms up, dilates blood vessels, has a strong analgesic effect. It doesn't burn.

For culinary and medicinal purposes, we can also prepare chili pepper paste. How to prepare a chilli paste? Add 300 ml of tomato puree and five tablespoons of oil to 50 g of dried chili peppers and put them into scalded jars. We pasteurize for 10 minutes.