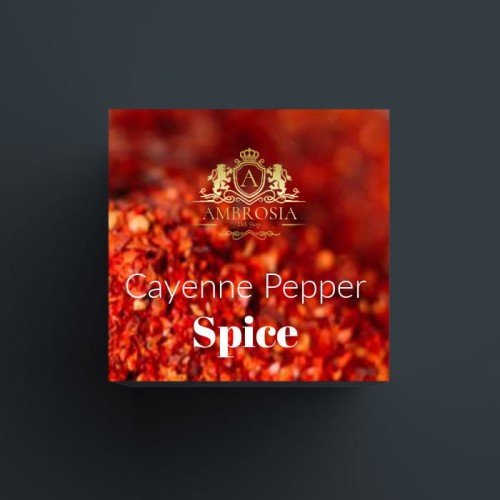 Ground cayenne pepper spice is distinguished by its intense aroma and sublime, unique taste. When added to dishes, it effectively warms up our body and also tightens the appetite. It is indispensable for seasoning bean dishes, meat dishes, stews and spicy soups. Using ground cayenne pepper in the kitchen, we can feel the hint of exotic, spicy cuisine of the world.

Are you hungry? See the recipe of this spice:

Cayenne pepper is a spice that some people may mistakenly associate with pepper, and yet it is nothing more than dried and ground whole (including seeds) chilli pepper of a special variety. Few people know that thanks to the capsaicin contained in pepper, it has a number of beneficial health effects on many components of the body - the cardiovascular system, cancer, gastrointestinal tract, and also has a sensational effect on weight reduction as a supportive agent. Read more about the great activity of cayenne pepper and make sure you don't run out of it in your pantry!

Cayenne Pepper Cayenne Pepper is a spice variety produced from a special variety of peppers - Capsicum frutescens, which, when ripe, are dried and then ground into a powder. It comes from Central America, and in Europe it was spread by Spanish and Portuguese explorers at the turn of the 16th and 17th centuries. At present, this vegetable is grown mainly in Pakistan, India, Argentina and the USA. As a commercial product, it is mainly in the form of pepper, but there are places where you can easily buy fresh pepper. The spice is characterized by an intense orange color, spicy taste and unique aroma. This is due to the capsaicin contained in the plant, which causes a burning sensation and sometimes even pain by irritating the taste buds. Taking into account the Scoville scale, which determines the sharpness of food, Cayenne pepper ranges from 30,000 to 50,000 SHU, ie the sharpness units (jalapeno 2,500-8,000 SHU). This substance is also responsible for some of the health properties of the spice. In addition to this compound, its composition contains a number of vitamins and minerals, which proves its high nutritional value.

Cayenne pepper - properties Cayenne pepper, or actually the pepper itself, has been used for years in folk medicine, mainly in the Central American population, where the vegetable comes from. There is nothing surprising in this, due to the fact that its consumption provides many beneficial health properties for various components of the body. Bioactive ingredients present in the pepper are particularly important, i.e. capsaicin, but also minerals and vitamins, which also have a therapeutic effect. It has antibacterial and analgesic properties, it is extremely effective in relieving neuralgia as well as headaches. For this reason, it is very often one of the ingredients of warming patches or ointments. In addition, the anti-tumor activity of Cayenne pepper, which kills cancer cells without harming the healthy ones, was confirmed. At the same time, it appears to affect the proper functioning of the immune system. It is perfect as a medicine for colds or runny nose. What's more, it supports the treatment of cardiovascular diseases by lowering cholesterol and triglycerides, it improves circulation and reduces the risk of embolism and clots, resulting in a heart attack or stroke. It turns out that, like other spices, it supports digestion and removes problems associated with it by relieving flatulence, accelerates the digestive process, and even supports the treatment of stomach ulcers by stimulating blood circulation in the stomach, as well as gastric secretory cells to produce gastric juice that has a protective function .

Cayenne Pepper for Weight Loss Despite its many health benefits, the benefits of Cayenne Pepper don't end there. Its remarkable effectiveness in reducing body weight has been noted. Thanks to the activity that accelerates metabolism and digestion, as well as suppresses appetite, it contributes to faster fat burning. It should be remembered that the spice itself will not bring any visible effects and will not cause a sudden drop in kilograms, however, in combination with physical activity and rational and healthy eating, it can support the action and work wonders! In addition, by increasing thermogenesis, it affects the increased energy expenditure for this process.

Cayenne pepper - dosage The maximum dose of pepper that can be consumed has not been established so that it would be safe for our health. Anyone can add seasoning to add variety to any dish, depending on the acceptability of the spiciness level, but do not use more than 2-3 pinches of the seasoning. In higher doses, capsaicin can, unfortunately, cause damage to the liver, mucous membranes and even the gastrointestinal tract. Caution should be exercised in particular in people taking certain medications (ACE inhibitors, theophylline, inhibiting the production of gastric juice, blood thinning - warfarin), as well as taking certain herbs (ginger, ginseng, ginkgo). These people should refrain from adding Cayenne pepper to their dishes for health reasons and for fear of interactions. It is also important that its consumption may reduce the effectiveness of aspirin, so when taking it, it is better not to reach for Cayenne pepper. A very important aspect is the reduction of blood glucose by capsaicin, therefore, fearing hypoglycemia, it is worth not to reach for the discussed spice when taking drugs for diabetes. It is important to remember that regular consumption makes the body immunized, so some health benefits, especially those supporting weight reduction, disappear. That is why it is recommended as a small addition to many dishes, but not every day and not every day. Additionally, it is not suitable for pregnant and lactating women and children under 12 years of age. To sum up, cayenne pepper is a spice with wide healing properties, such as supporting the fight against cancer or diseases of the cardiovascular system, it has an analgesic effect and effectively improves the functioning of the digestive tract. It is for this reason that it is ideally suited as a weight loss accelerator, which has been scientifically proven. In the absence of factors predisposing to abandoning its operation, it is suitable for everyone. This spice is inexpensive, so it is worth ensuring that it always takes place among the spices in our home.